Protecting the Turtles of Dahican 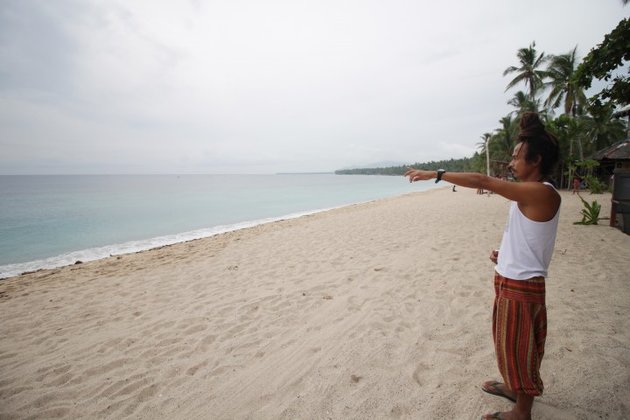 The beach faces Mayo Bay which is bounded by the Pacific Ocean, Dahican's long stretch of creamy white sand shores and clear turquoise waters has attracted a multitude of tourists to Mati City, with Dahican as its tourism epicenter.

Several public and private investments now have sprouted along the once rustic coconut palm fringed coast.

For Winston Plaza, a surf instructor who serves as one of the kuyas (elder brother) of the local surfing and skimboarding group "Amihan sa Dahican" the influx of visitors and the subsequent development has brought peril to Dahican's other residents -- the sea turtles.

"Since 2000 we have released thousands and thousands of turtles in the beach but lately from 2017, we noticed a 70% decrease of turtle eggs hatched in Dahican," Winston said.

Among the reasons for the decrease of turtle nestings include unsustainable human activity in the beach. The noise emanating from videokes, resorts putting up spotlights which faces the coast, human activity like parties during nighttime and unabated development along its shores.

"Turtles don't want to be disturbed when they lay eggs and they don't like bright lights," Winston said.

He said they are awaiting the implementation of a sustainable development plan for Dahican which involves the Department of Environment and Natural Resources and the Mati City local government. Among the plans that will be implemented is the strict implementation of the 25-meter easement from the highest high tide mark of the beach.

This means no littering, no smoking and no drinking of alcohol and liquor. Camping and bonfire will also be prohibited along the easement. Videoke will have a cut-off, structures including docked fishing boats will be moved away from the easement.

Sonny "Bayogyog" Aporbo, a member of Amihan sa Dahican won the International Skimboarding Championships in Penang, Malaysia in the years 2012 and 2015. Winston also took first runner-up prize in the Paddle Boat race in Penang in 2012.

Amihan sa Dahican was established in 2000 by Winston's elder brother Jun Plaza. The group was made up of locals and children of fisher folks living in the area. They were taught how to skim and surf by Jun who made one condition, that they continue schooling.

The group's base lies in a seaside property owned by the DENR who gave them a 25-year lease on the land. The site also has a turtle hatchery where the group deposits the collected eggs and where they would be protected until they are hatched, and ultimately these turtle hatchlings would be released to the sea.

The group has transformed into eco-warriors, they make nighttime patrols over a 1.5 kilometer stretch of the beach and with their two patrol boats, they conduct off-shore patrols along Mayo Bay.

The group has slowly inculcated to Mayo Bay's fisher folks the need to protect the turtles. Fisher folks would deposit turtles entangled in their nets to the group and to appreciate the fisher folks' efforts they would provide them with rice and some canned goods or they would train these fisher folk children surfing and skimboarding plus providing them with school supplies.

"There are so many turtles here," Winston says, he describes meeting five to six turtles when swimming along the reefs off shore.

Mayo Bay is a site of great biodiversity, according to Winston there are seven species of whales and five species of dolphins living off the coast of Dahican, other marine creatures found in the bay include dugong (sea cow) and butanding or whale shark. The turtles along the beach belong to four species, Olive Ridley, Green Sea, Hawksbill and Leatherback turtles.

Winston enumerates many of Dahican's new investors, where some would be putting new resorts. He wishes that these investors would also consider Dahican's pristine environment into their business plans.

He hopes that despite the coming of tourists to Mati City particularly Dahican, the beach's original denizens would still find a home to come and nest. (PIA/RG Alama)