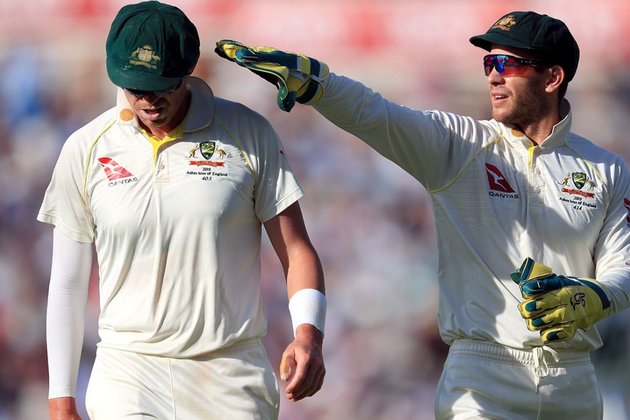 Tim Paine has revealed he suffered a broken thumb towards the end of the final Test against England, and praised Peter Siddle for battling through an injury he sustained early in the match.

The exact details of Paine's injury are yet to be confirmed, but he expects to be back training soon and it is understood Cricket Australia's medical staff are not concerned by the injury.

"There's a bit of recovery to be done," Paine said in his column for the Australian. "My thumb was broken towards the end of that Test but it is not displaced, so I should be right to get back into training early."

Paine has a history of broken fingers, requiring seven operations on his right index finger after a nasty break in 2010, which almost ended his career. He was already due to be rested for the start of Tasmania's Marsh One-Day Cup campaign, which begins on September 23; the Sheffield Shield begins on October 10.

Whatever domestic cricket he plays this season will only be for Tasmania as he also revealed he will not be taking part in the BBL, in order to conserve his energies for Test cricket. He could have been available for the second half of the tournament - the New Zealand series finishes in early January - but wants to manage his workload. Given Australia have a large gap in their Test schedule after January, that adds further weight to Paine's comments about wanting to continue in the role for some time to come.

"I'm keen to see just how far we can take this team and I've decided to give up the BBL so I can concentrate on red-ball cricket and being in the best place to lead them," he said. "Being captain is draining and I think I should take every chance to recharge my batteries. I'll go back to the BBL when I'm finished, but for now my focus is on my main job."

Paine also praised the effort put in by Siddle during the Oval Test, after the bowler suffered a hip injury on the opening day. Siddle was preferred ahead of Mitchell Starc and James Pattinson for the final pace-bowling spot and struggled to provide his usual control throughout the match, although produced his best spell towards the end of England's second innings when he removed Joe Denly and Jos Buttler.

"Peter Siddle tore a hip flexor bowling on the first morning," Paine said. "He has copped a bit of criticism for not bowling as well as he we know he can, but the team knows just how heroic he was. A lot of other people wouldn't have bowled again in the match, but he pushed on because he didn't want to leave Josh Hazlewood and Pat Cummins to do extra work. He's a warrior, Sidds, and we love him deeply for that."

Australia's next Test match starts on November 21 against Pakistan at the Gabba. That series will be preceded by three T20Is against Sri Lanka and three against Pakistan, from late October, to begin the international season.