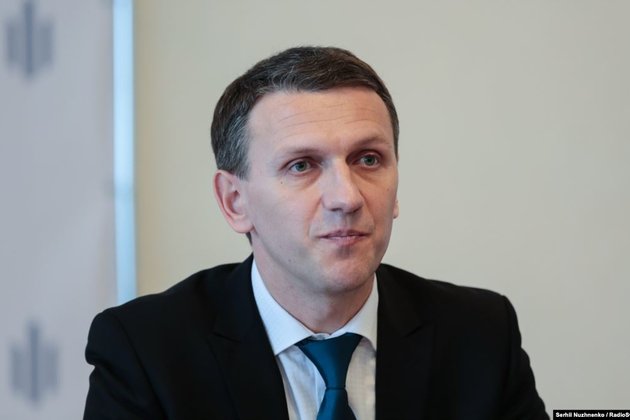 An international arrest warrant is being prepared for Ukrainian billionaire Kostyantyn Zhevaho, who the newly created State Bureau of Investigations (DBR) suspects of large-scale money laundering and embezzlement of funds from a bank he formerly owned.

DBR chief Roman Truba said in a briefing on October 9 that an arrest warrant was issued for the metals magnate in Ukraine and that documents were being prepared for an international wanted notice.

According to procedure, a court must first rule on whether Zhevaho can be arrested and within the scope of an international arrest warrant.

Authorities suspect that Zhevaho funneled 2.5 billion hryvnyas, or $100 million at the current exchange rate, from his former Finance and Credit bank.

The bank was shuttered as part of the central bank's drive after 2014 to clean up the dirty banking system that was riddled with third-party lending practices. Some 80 banks lost their licenses over a two-year period, with some going into receivership while others were liquidated.

Privatbank, once the largest private lender, was the most notorious of them. International auditors found a $5.5 billion hole on its balance sheet. It is currently nationalized and run by personnel appointed by the central bank.

Its former co-owner, billionaire Ihor Kolomoyskiy, doesn't face criminal charges related to his former bank and is currently engaged in litigation in Ukraine and foreign jurisdictions to reclaim ownership rights to the financial institution.

Zhevaho, a former lawmaker, is also the majority owner of Ferrexpo, a London-traded iron ore pellet producer based in Poltava, a centrally-located region in Ukraine. The company boasts Europe's largest iron-ore deposit, with approximately 20 billion tons of resources.

On its website, Ferrexpo says it is the third-largest exporter of pellets to the global steel industry.