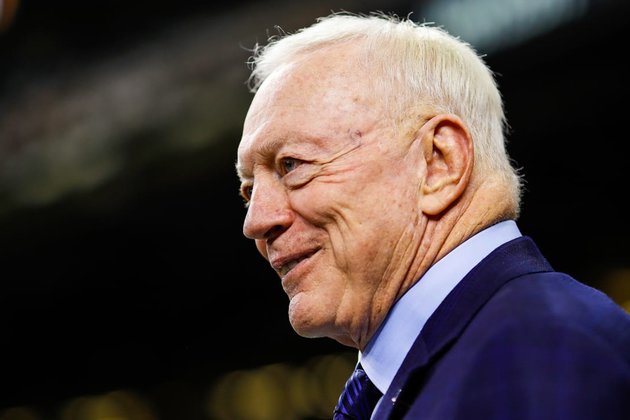 FROM HOME, Texas - All right, here we go. Dallas Cowboys Training Camp 2020 is under way.

The only normality being the annual opening press conference Wednesday with Cowboys owner Jerry Jones, COO Stephen Jones and the Cowboys head coach. And even that is not what we've been used to over the past nine seasons, Mike McCarthy now in that seat.

Folks, this ain't Oxnard. Not outdoors on the tennis courts at the Residence Inn where normally the 11 a.m. sun is bearing down on the assembled media, the temperatures rising into the mid-70s, heaven forbid. Not with two manicured grass fields as a backdrop, with stands and tents popping up everywhere. No Dale Hansen from

Channel 8 with his usual Jerry-ribbing question.

No questions on one of the newest additions to the team, Aldon Smith, not a soul challenging Jerry on why he would take a chance on a guy who's been through multiple suspension while not playing a down of football since 2015. No one asking if anyone is missing or late. No one jabbing Jerry in the side for a Super Bowl prediction. No one asking the head coach if the Cowboys are capable of winning two playoffs games in one season. No salary cap questions for Stephen.

In fact, this camp-opening press conference lasted 20 minutes before a pure football question was asked.

Remember, this is our Afraid New World. COVID-19. Social justice. Safety Protocols. PPEs. Bubbles. The anthem. The flag. Where taking a knee no longer has concession overtones. Opt-outs. Full seasons. Canceled seasons. Percentages of fans allowed into stadiums. No masks, no service.

Every day seemingly like going Up the Down Staircase. (Look it up.)

But leave it to Jerry Jones, the eternal optimist, who dared to dream when buying this financially bankrupt franchise in 1989, much like what original owner Clint Murchison Jr. did 60 years ago, thinking "professional" football could creep into the collegiate psyche of southern football fans in 1960.

Yep, Jerry "dreaming" with nightmares stopping so many in their tracks these days. Yep, that's Jerry.

And with Dak Prescott following right after equally upbeat, man, these are going to be shots heard round the world.

Doc Jones: Leave it to Jerry Jones to head off the media posse, bound and determined to pin him up against the wall for not having spoken out on these social justice issues, on the anthem or kneeling. When told everyone knows his stance from the 2017 season when kneeling for the anthem became vogue and Jerry saying at the time his players will "stand," Jones calmly said when confronted if that's still his stance, "That was then, two years ago, this is now. We've had very, very sensitive times. ... I have nothing to prove as far as where I'm standing with the flag and as far as where the Cowboys stand. I have nothing to prove regarding my players and my support of our players. What I do want to show, and all of us to be a part of, is a word called grace - grace. Not only grace in our actions, but grace where they are coming from." Brilliance, sheer brilliance climbing out of that rabbit hole, well, gracefully. Next question. Timely Bubbles: Been spending weeks discussing why aren't the Cowboys turning this training camp into some semblance of a bubble by putting all players up at the adjacent Omni hotel. Just as if they were at the Residence Inn in Oxnard. Seemed safer being around teammates being tested for COVID-19 every day than banking on those living in your residence doing the right thing to be safe. And lo and behold, that's what has been taking place, Dak acknowledging he's already moved into the Omni for training camp, and estimated like 90 percent of the 80-man roster is doing the same. "As long as this season gets to play out, I think part of it, the healthiest teams wins." That's why he's the quarterback. Happy Camper: If you are taking Dak at his word, and if you judge a man's words by his eyes and the look on his face when speaking, nothing could have been further from the truth when that report surfaced claiming how unhappy Dak was not getting a long-term contract and that he was merely biding his time before getting out of here. Huh. "I grew up wanting to be a Dallas Cowboys, and I am. And I've got dreams of being a Dallas Cowboy until I'm done throwing the football; none of that is going to change just because we couldn't reach an agreement for this season," he said with feeling. "I'm a Cowboy now and that's all that matters." End of story. Football Matters: Imagine that. McCarthy said when the team lines up Friday for the first OTA-like practice, the first-team center will be Joe Looney, as expected. But also as expected, he did not shy away from competition there. Same at left guard. "Connor Williams at left guard, he's still coming off the injury (last year's ACL repair), so we will work him in as camp goes forward. He won't be full go right out of the gate," McCarthy said, mentioning "Connor McGovern and all those guys will be rolling in there. (At center) Joe Looney has been taking the snaps there with the first unit." Keep an eye on rookie Tyler Biadasz, too, there. Camp Shots: Here is what Dak had to say of his new offensive toy, wide receiver CeeDee Lamb, "Great guy, great athlete, great player, excited for his future, excited for now. ... Today, I heard him talking about how fun special teams was. He's going to be a great addition to this team" . . . Dak also said he always dreamed of having a football field in his backyard. Well, he acknowledged that now he does. Full field. Wonder if he painted logos in the end zones? Some backyard ... Vice president of player personnel Will McClay has admitted preparing for next year's draft with so many teams opting out of playing college ball this season will present a new challenge, but his staff will begin looking hard at this past season's tape immediately, and that like the challenges that took place for this year's socially-distanced draft, they'll just have to figure it out ... And as for fans attending Cowboys games this season at AT&T Stadium, Jerry Jones said, yes, there will be fans, but did not want "to speculate on the number." Guessing, just yet.

And the last word goes to Stephen Jones, exuding the optimism of his dad during these trying and uncertain times, saying of this team's roster following free agency, the draft and getting just a brief glimpse of his 80-man roster before things crank up on Friday, "I feel as good about this team, personally, my opinion, I feel as good about this team as any that we've had over the past five or 10 years." That there is a mouthful.