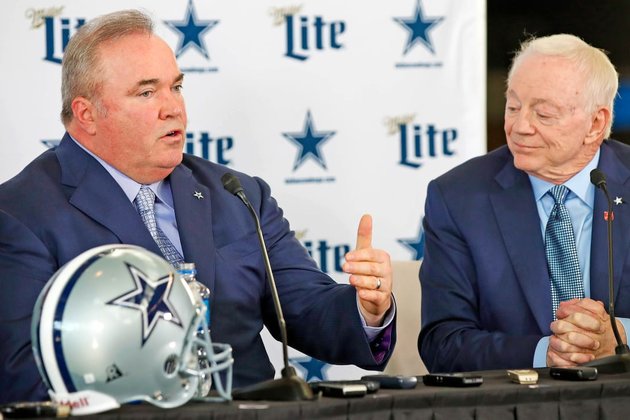 With the 60th anniversary of the Dallas Cowboys franchise kicking off amid uncertain and unpredictable times, the organization's three top decision-makers addressed issues like how COVID-19 precautions may affect the season, the Dak Prescott contract negotiations and much more.

With COVID-19 precautions looming over the upcoming season, Jerry Jones said, "The Dallas Cowboys plan on playing all of our football games this year and playing them in front of fans." He would not speculate on how many fans would attend games at AT&T Stadium but stressed that the stadium is uniquely "well-suited" to put together groups of people who are safely spaced apart. Jerry Jones also said that he has yet to personally speak to the players about kneeling during the National Anthem or other expressions regarding social justice. He said that he wants the Cowboys organization, the players, and the fans to approach these issues with "grace." (READ MORE) In regards to the organization's inability to come to an agreement on a long term contract with Dak Prescott, Jerry Jones acknowledged that the backdrop of COVID-19 and its potential economic consequences in the coming years had an impact on the negotiations, claiming that it was a "less than stable time to be talking about generational money." Stephen Jones later stated that he was "more convinced than ever" that they will come to an agreement on a contract extension with Prescott when negotiations open back up. Mike McCarthy claimed that, while it is a very different training camp than the organization is used to, they are "trying to create an Oxnard-like environment" in Frisco and that The Star is uniquely set up to accommodate that attempt. He said that players have "bought in" and pointed towards a number of players who have reportedly chosen to sequester together in the Omni Hotel next to the practice facility. Stephen Jones addressed the developing situation in college football and how it might affect scouting for next year's NFL Draft. He said that the scouting department will "have to be prepared to look back on tape from last year" in their evaluation process McCarthy confirmed that the organization and his staff has spoken about how they would handle the possibility of McCarthy contracting COVID-19 at any point this season. He said, "You have to have a plan for every scenario," and that there is a contingency plan in place. Joe Looney will be taking snaps at center with the first team to kick off official practices, according to McCarthy. He said that "the goal is to have a starting five" for the offensive line as soon as possible, but training camp will determine starters. Connor Williams is not on the PUP list, but McCarthy said that he will not be a full-go to start practices coming off of knee surgery. McCarthy does expect him to be able to compete for a starting position at some point. Connor McGovern will see snaps at left guard early in practices. Having evaluated the additions and losses of players in the offseason, Stephen Jones said that he felt the Cowboys filled all the needs they wanted to address coming into this season. "I feel as good about this team as any in the last five or ten years," he said. Rather than focus on one position, McCarthy claimed that he expects there to be battles at "every position" as training camp proceeds.