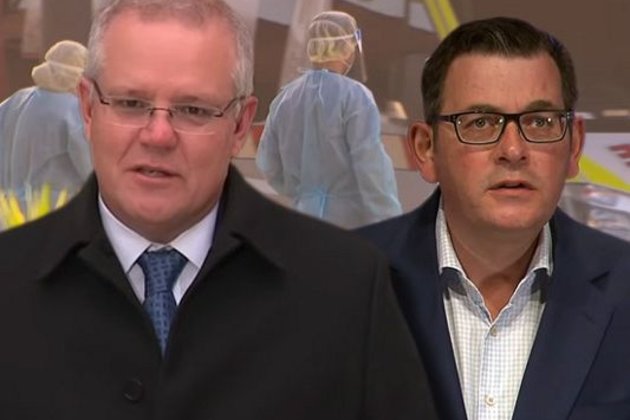 In a time where leadership and responsibility is more crucial than ever, our government is playing a political blame game, writes Mungo MacCallum.

HAVING TRIED PLEAS, threats, restrictions, lockdowns, fines and closures in vain, our political masters are now apparently cutting to the melodramatic climax: scare the living crap out of us.

And, to set an example, their current action plan seems to be to hide under the blankets until the monsters go away and the nightmare ends.

Except part of the campaign of fear and loathing is the likelihood that it won't end - at least not in the time span the quivering victims will accept.

We are now being bombarded with figures that are not just raising hair, blowing minds, watering eyes and smacking gobs; they are so horrific that they quite literally defy comprehension.

Credible modelling on various fronts is now predicting infection rates of over a thousand per day, remaining in the hundreds well into spring. Official unemployment will reach double figures and stay there until next year, with the real numbers far worse. The hit to the economy will be in terms of tens of billions of dollars a month and the recession will drag on for at least another two quarters.

COVID-19 demands a social democratic response, not a neoliberal disaster

Across the world, social democracies have fared much better than countries ruled by neoliberalism in combatting the effects of COVID-19, writes Rashad Seedeen.

And these are just the raw statistics. The human cost of the pandemic is now starting to hit home with little hope of relief in sight. Many of those who survive will be broke and broken, without the hope of a job and the real risk of becoming homeless. There will be an aftermath of long-term post-COVID-19 health problems. The fallout in the decline of the wellbeing of the populace - physical, mental and emotional - will lead to consequences that can barely be imagined.

But they will have to be, because even if our respective governments are unable to deal with them, we will have to. Our much-trumpeted resilience is likely to be tested in ways that Prime Minister Scott Morrison, too frightened of the virus to attend Parliament, has never envisaged.

So he has given up even trying. Instead, we are offered distractions, like yet again re-opening the Christmas Island gulag at vast cost and for no useful result. And absurd evasions, like the previously sensible Brendan Murphy, translated into a career bureaucrat, telling us he can't name dysfunctional nursing homes for fear of causing 'reputational damage'.

But surely that is precisely the point. We need honesty, transparency and a taste of the brutal truth. The real damage is being caused by the ducking and weaving, the buck-passing and cover-ups. And if a few reputations get bruised in the process of being honest, well, tough titty.

But that would require rather more conviction than our National Cabinet of nervous Nellies is prepared to manifest in its present prevarication. Our leaders emerged briefly to rubberstamp another tweak to keep JobKeeper on the books, possibly in response to a cabal of billionaire property developers sooled on by The Australian to demand more handouts.

But then they dived back under the doona to resume their strategy of masterful inaction, which seems to consist largely of hoping - or if they prefer, praying - that the hard lockdown in Victoria will eventually produce results.

But not immediately. The old joke needs to be refurbished; the reply to the question "How do you keep an idiot in suspense?" used to be, "I'll tell you tomorrow". Now it has to be pushed back to, "I'll tell you in about two or three weeks. And in the meantime, quiver and obey". And if, as September rolls in and there is still no credible answer, what then? Well, find a scapegoat, of course.

Scott Morrison got the process underway in the National Cabinet meeting last week when he gave the states a collective kick for not, as he saw it, doing their bit; they were effectively hoarding, keeping their balance sheets relatively healthy, instead of contributing more assistance to those suffering economic hardship under the pandemic crisis.

The escalation of COVID-19 cases in Victoria has been made worse by the attitudes of conservative politicians and media.

They were chipping in a mere $40 billion between them, he complained, while the Commonwealth had already shelled out well over $300 billion, and counting - about two per cent of GDP from the states and some 16 per cent from the Feds. Clearly the skinflint premiers and their treasurers need to lift their game.

But this dodges the inconvenient fact that it is the Feds who have the money - almost all the revenue raised by the states comes straight from Canberra and much of it depends purely on the whim of ScoMo and his team. This is how our fiscally imbalanced Federation operates and will continue to operate unless Morrison, or one of his braver successors, is prepared to tackle it. We are not holding our breath.

And in any case, blaming the states is so passe, a refrain from the last century. We need a more personal approach; a victim who can be identified, named and shamed. Step forward, Victorian Premier Daniel Andrews.

The rambunctious Right rulers of the Liberal Party, egged on by the Murdocracy of the media, have been urging more belligerence for months. As a Labor Lefty - a Maoist dictator, as they see it - Andrews is intrinsically loathsome. And as a successful and popular Premier, he is utterly abhorrent. So let's put in the boot.

Morrison has been reluctant, savouring his role as an inclusive leader, a mediator. But as his own position becomes more vulnerable, especially over the unravelling of the disastrous aged care industry, which the Commonwealth ultimately controls, it is becoming more obvious that it's time for a bit of duck-shoving. As Andrews admits, in Victoria the buck stops with him, but nationally, it ends up with ScoMo.

So we have a little scene-setting: Morrison is now saying that Andrews must bear responsibility for the second COVID-19 wave. Not yet, perhaps - we can be all in this together for a bit longer. But the gloves are coming off and the brass knuckles are being readied to replace them.

Mungo MacCallum is a veteran journalist who worked for many years in the Canberra Press Gallery.