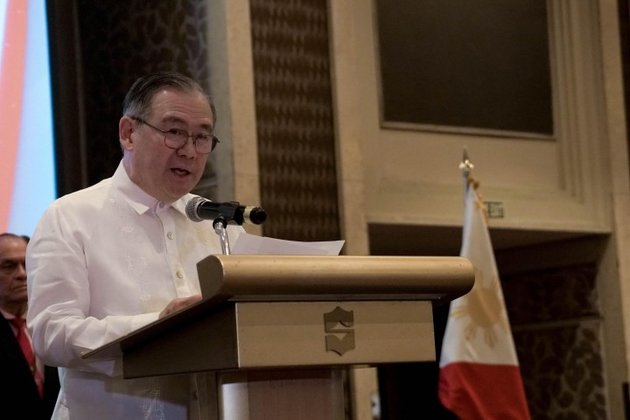 PARAnAQUE CITY, Oct. 28 (PIA) -- The Philippines would concede nothing when it comes to its territorial claims in the South China Sea (SCS), Foreign Affairs Secretary Teodoro Locsin Jr. on Tuesday said.

"That's how we are doing it now-- no concessions. We allow no infraction to go unanswered and then we just try to see if we can also cooperate on other fields such as the fact that China is the rising economy in the world," he said during an Asia Society webcast.

He added that the Philippines had lodged a multitude of diplomatic protests against every incursion that China has made.

"When I was in the UN (United Nations) I used to say that firing diplomatic protest is like throwing paper on a brick wall but I was told 'No don't be like that, it has a significance in international law, once you let one infraction pass then it establishes a bad precedent which gives the world an excuse to yield you to the stronger and richer power.' You don't give them an excuse," Locsin said. "And that's why we have started to build up our, not exactly our Blue Water Navy, but we have enough Corvettes swarming the areas, because that's the Chinese strategy-- to swarm the areas also with the fishing boats."

Locsin said Manila is resolved to protect "every inch" of its sovereignty and sovereign rights in the West Philippine Sea under international law and as "clarified and affirmed" by the 2016 arbitral award.

At the UN, President Rodrigo Duterte himself underscored that the landmark ruling, which invalidated China's massive nine-dash claims in the SCS, is now part of international law beyond compromise.

"The Philippines won the award with zero help from anybody and with great hindrance from most. It welcomes international support for the award, better late than never, but in no way the Philippines acknowledge that support as adding an iota to the legal stature of the award," Locsin said.

He said Manila continues to apply a dual-track approach in dealing with China by separating talks on territorial disputes and economic development. (PIA NCR)

Microsoft expanded its esports scope Wednesday, announcing the acquisition of tournament event platform Smash.gg.In a tweet from the MSN_Esports account, ...

Clinical research firm with Irish base prepares for Covid-19 vaccines

Washington [US], November 30 (ANI): US President-elect Joe Biden on Monday announced key members of his economic team, including an ...

GENEVA - The U.N. Conference on Trade and Development reports the COVID-19 pandemic has had a devastating impact on most ...

A celebration of 2020? Many might think we should just hold our breath and say good riddance to what has ...

Investigation in U.S. mounted into bribery for pardons claims

The U.S. Department of Justice is investigating a potential crime involving bribery and presidential pardons, according to court documents unsealed ...

War for the Planet of the Apes