Biloela family to be released into community detention - what happens now? 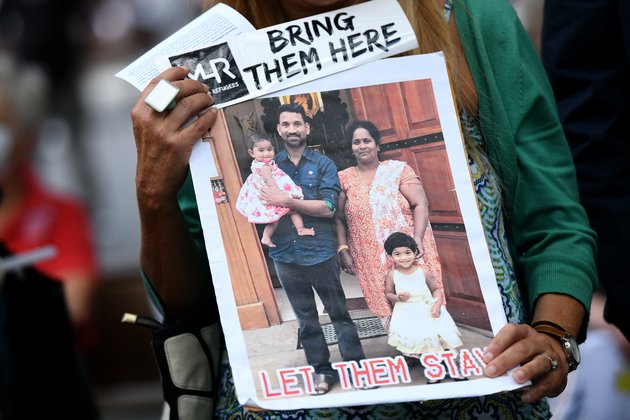 Federal immigration minister Alex Hawke has exercised his power to allow the Murugappan family from Biloela to live in the Perth community.

The Tamil asylum seeker family was previously held in an "alternative place of detention" (APOD) on Christmas Island. Residence determination, also known as "community detention", was introduced in 2005 an alternative to held detention. As of April 2021, there were 536 people in community detention, including 181 children.

Community detention allows people to transition out of detention into the community with appropriate supports. The family will have to live at a specified address and are legally still "detained". They will not be under any physical supervision and will have the ability to live in the Perth community and engage with local support networks, and the children will be able to go to a local school. However, the requirement to live at a particular place means they are not free to leave Perth and return to Biloela in Queensland, unless the minister allows them to.

Families in community detention are provided with support services from local community based organisations contracted by the Department of Home Affairs under the Status Resolution Support Service . The Murugappans will be given accommodation, health and welfare services as well as casework support. A small income is provided to allow them to pay for food, clothing and utilities, but the parents will not be allowed to work.

Much has happened in recent days. Physical and mental health must be a priority. There is a strong body of evidence to suggest people's health deteriorates significantly in immigration detention, with a clear association between time in detention and rates of mental illness. Anxiety, depression and traumatic stress experiences are commonly reported. Length of time in detention is associated with severity of distress. There is evidence that mental health improves shortly after release, although results have shown that the negative impact of detention can be ongoing.

After years in detention, the family's situation has been brought to a head by their youngest daughter, Tharunicaa, being transferred to hospital in Perth with a serious blood infection. Medical experts have advocated for the family to be reunited as the little girl recovers.

Read more: View from The Hill: the Morrison government has escape hatch in Tamil family case - if it wants to use it

What are the legal options now?

Read more: As a young child is evacuated from detention, could this see the Biloela Tamil family go free?

The minister has previously allowed the father, Nades, to apply for a protection visa. The mother, Priya, has also applied and included the older daughter in her application. All had applied for protection visas, claiming they would face persecution if returned to Sri Lanka. Their claims were not successful and they were then detained in 2018.

Attempts to remove them from Australia were stopped by an injunction issued by the courts on the basis that the youngest daughter had not had the opportunity to apply for a protection visa.

Section 48A of the Migration Act allows the minister to personally allow a person to apply again for a protection visa where they have previously been refused if he considers it in the "public interest" to do so. The minister's guidelines state he can exercise this power if he considers there are "exceptional circumstances", including new information, or where there is a significant change in the circumstances of the case.

In the case of the Biloela family, this could include a change to the circumstances of their case that has arisen since they last applied, which are known as sur place claims. In May 2021, an asylum tribunal in the United Kingdom issued new country guidance addressing the risk of persecution for Sri Lankan nationals. It sets out the risk of persecution as a result of sur place activities that are (or perceived by the government to be) in opposition to the government of Sri Lanka.

This is important in the case of the Biloela family, as they are clearly identifiable due to the large amount of national and international media coverage, which has included references to their previous asylum claims.

Read more: It's time to give visas to the Biloela Tamil family and other asylum seekers stuck in the system

The immediate need for a trauma-informed response

Community detention is an appropriate compassionate response and a step in the right direction. However, the failure to exercise a discretion either granting the Murugappans a visa or allowing them to apply again leaves the family in limbo.

Prolonged uncertainty and ongoing trauma can have devastating impacts. There is a well documented body of evidence that when people are traumatised and at the same time feel trapped by their circumstances, it becomes increasingly difficult to make decisions, sustain healthy, satisfying relationships or manage life's uncertainties. Efforts must be made to reduce that uncertainty. A trauma-informed approach is essential to reduce ongoing distress and prevent retraumatisation.

Specialist support for both parents and children are essential. How children experience traumatic events, how they express their distress, and what actually helps, depends in large part on the children's age and stage of development. It also depends on the circumstances of the entire family. The goal must be to restore certainty to these children's lives and the lives of their parents.