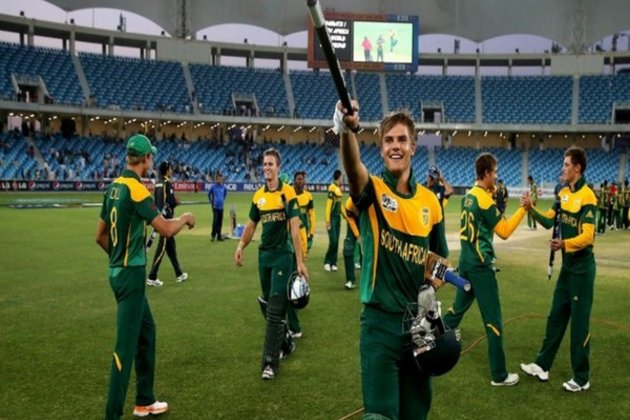 The Proteas earned a three-wicket win in Guyana, with England beating Papua New Guinea by 281 runs.

Captain's knock from Van Heerden sees South Africa past hostsIn a low-scoring affair in Georgetown, it was South Africa captain and wicket-keeper George Van Heerden who set up a three-wicket win over the West Indies.

Ahead of an opening clash with defending champions Bangladesh, England made the most of being put into bat as George Thomas (90) and Jacob Bethell (78) built the perfect platform.

Wellalage shines for Sri LankaSri Lanka's bowlers produced a remarkable display to bowl out Uganda for just 46 with Dunith Wellalage, the captain at the 2022 ICC U19 Men's CWC, the pick of the bunch in Guyana.

Wellalage finished with figures of four for none from his three overs as he raced through the Ugandan middle and lower order in a 231-run success.

McGuire has Scotland in a spinFive wickets from Nathan McGuire fired Ireland to a seven-wicket victory over Scotland in Georgetown.

The off-spinner helped reduce Scotland to 138 all out with his 5-33, removing top-scoring duo Tomas Mackintosh (26) and Muhaymen Majeed (24) in the space of three balls.

Muzamil Sherzad chipped in with two for 17 as Scotland struggled after electing to bat.

In reply, an unbeaten half-century from opener David Vincent (51 not out) made it a comfortable chase, despite Oliver Davidson's three for 27.

Ireland will look to build on the performance in their opening Group B match against Uganda, while Scotland kick-off against Sri Lanka in Group D. (ANI)