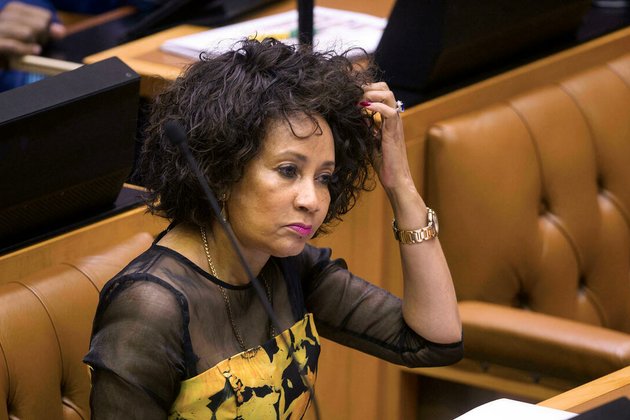 The article is seen as an opening volley in her bid to win the presidency at the elective congress of ruling African National Congress in December.

Her early appearance over the parapet is entirely in keeping with the 58-year-old member of the iconic Sisulu family's desire to lead the ANC and thereby the country.

She has held no fewer than six cabinet positions, including the defence and foreign ministry portfolios. Her first bid for the presidency was a decade ago when she was beaten by then incumbent Jacob Zuma.

Then, in 2017, she contested the deputy presidency where she was beaten by David Mabuza.

Sisulu's opinion piece says apartheid was legal, as were the Jim Crow laws in the United States, colonialism and even Nazism.

"So does that mean we have the rule of law?" she asks. "And whose law is it anyway?"

She asks how poverty can exist in a judicial system and under a constitution that is admired by the world.

She charges that South Africa is being "mentally colonised by black judges settled with the view and mindset of those who have dispossessed their ancestors".

Embarrassingly, she is accused of plagiarism for using several hundred words without accreditation from a speech by former British Attorney General Dominic Grieve.

Sisulu is a member of the executive committee of the ANC, which has distanced itself from her remarks.

The presidency calls the article recklessness of the highest order.

Minister Mondli Gungubele points out that the Constitution of which Sisulu is suddenly so critical was never forced upon her.

Acting Chief Justice Raymond Zondo says Sisulu's article is an insult to judges of the Constitutional Court, the Supreme Court of Appeal and the provincial High Courts.

He strongly disagrees with her submission that the rule of law does not serve the interests of the black majority of South Africans.

Judges must be prepared to accept factual criticism and analysis, says Zondo, but none of this is contained in Sisulu's article which is simply insulting.

Craic Watt-Pringle, the chairman of the General Bar Association, says the timing of Sisulu's piece can be interpreted as an attack on the Zondo Commission into state capture.

He says President Cyril Ramaphosa must take action against a member of his cabinet who has crossed the line.

Her criticism of unspecified judges and unspecified rulings serves to undermine the judiciary and intimidate judges.

A former ANC chief whip, who served a prison sentence for fraud after being appointed to defence review committee by Sisulu, accused Zondo of being a cry baby and says judges must get used to being criticised.