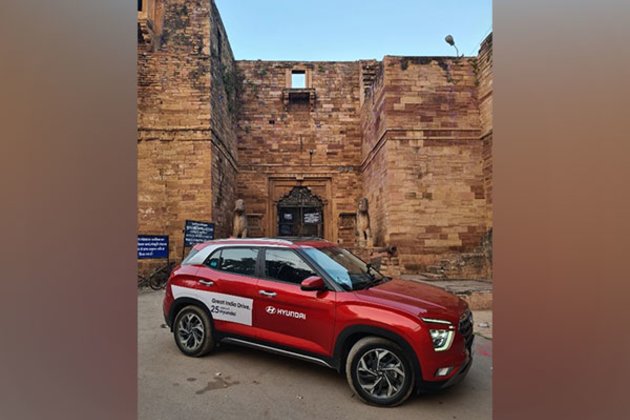 Bhopal (Madhya Pradesh) [India], January 17 (ANI/Mediawire): The Hyundai Great India Drive is an annual pilgrimage to get unique stories from the vast expanse of India. This year we found ourselves behind the wheel of a Hyundai Creta, which features one of the cleanest diesel engines on sale currently, as we went to look for a story on a topic that is very relevant to our current times - sustainability. It is a broad topic so we decided to portray something that will cover it holistically.

Starting from the swanky new Hyundai India headquarters in Gurugram, our search took us along the fast Yamuna Expressway where the Creta reveled with its diesel torque spread and efficiency munching the entire stretch with ease.

Beyond it was a busy NH4 to the historic city of Gwalior where the state tourism board along with UNESCO have kick-started a unique pilot project - Historic Urban Landscape Approach - to preserve the heritage of the ancient city while keeping its current residents' needs in mind.

"Usually, heritage preservation and restoration gives a clear upper hand to the historic sites while sidelining the human lives that have grown around it," notes Nishant Upadhay, one of the specialist architects working on the project. "We are trying to see how we can make it useful for the residents so that the urban heritage remains intact while we try to keep the history alive for our future generations to see themselves."The selfie-seekers seemed pleased even off cameras. Baijataal, a public space complete with a reasonably clean water body in the heart of Gwalior, seemed to be the kind most urban dwellers seek to unwind after a busy day. This is the place where legendary singer Tansen is said to have performed centuries ago. The setting must have definitely changed but thankfully due to efforts of MP Tourism it is not lost despite population influx and rapid urbanization of Gwalior.

For example, at Baijataal they have used one of the historic properties and converted it into a digital hub for Gwalior Samrt City programme which monitors the entire city and even advises police on traffic making it useful for the residents while still giving them access to its history.

Unlike Baijataal which is relatively quaint, Maharaj Bada or Jayaaji Chowk is a busier but historically more relevant area. This used to be the power centre for the erstwhile rulers. The authorities have now converted most of the structures into public spaces.

For eg, the European-influenced Town Hall is now a full-fledged 300-seat auditorium for cultural activities. It is another example of how residents can benefit today while not losing the city's heritage.

"This pilot project will aid both cities (the town of Orchha is also part of this project) with a groundwork for an effective cultural heritage management," says Shiv Shekhar Shukla, the Principal Secretary of the Madhya Pradesh Tourism Board.

"This can also facilitate recognitions at global level, which will open up new tourism and economic opportunities for several public and private stakeholders in the city," he adds.

Interestingly, Gwalior has some unique, local sustainability stories which have creeped in through necessity. The city is famous for its sandstone which are mined from nearby regions. Stone Park on the outskirts of the city has numerous mills that prepare these stones both for domestic and international markets.

The cutting process invariably creates debris in the form of smaller stone pieces and chips. But instead of dumping them, these get used by locals around the Stone Park to build walls of their houses. So, not only are they saving the region from mounds of debris, they also save on usual construction materials like brick and concrete which are expensive and resource intensive.

The year-long project has a long-term agenda. This pilot project will help create a blueprint as to how urban places of the present can be sustainably developed to make space for modernisation and ever-increasing human presence but still keep our history alive for future generations to cherish and enjoy. The learnings from this project will be used by UNESCO not only in India but around the world in other historic cities.

You Tube link: https://youtu.be/Yo9uUCR7e6gSustainability is going to be the key to continued life on this Blue Planet of ours. Human history and that of Earth is rich with knowledge and resources if we use it right. This year's Great India Drive is a reminder of our responsibility to safeguard these for our future generations so that they can enjoy and build a better society for everyone and importantly, themselves.

This is a TIMES AUTO initiative in association with HYUNDAI MOTOR INDIA (www.hyundai.com).

This story is provided by Mediawire. ANI will not be responsible in any way for the content of this article. (ANI/Mediawire)