R Madhavan promotes Cinedubs in Mumbai, says he would want to watch Sholay in Tamil 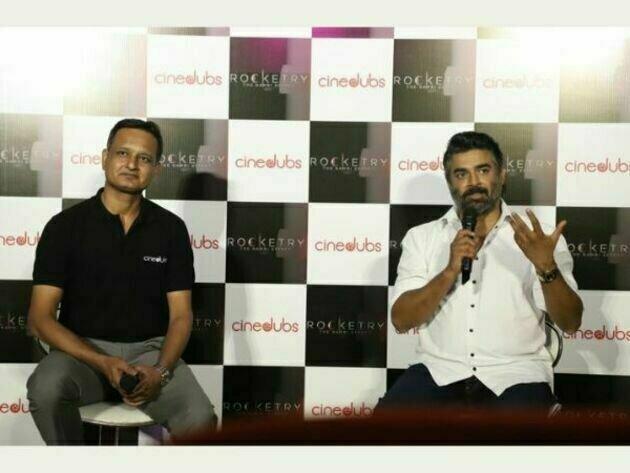 Mumbai (Maharashtra) [India], July 23 (ANI/PNN): Actor R Madhavan came together with Additya Kashyap of Cinedubs to promote the app that breaks language barriers in theatres. The actor also celebrated the success of his directorial debut, Rocketry: The Nambi Effect.

Cinedubs is a mobile application which can be downloaded from Google Play or Apple Store. The application allows its users to hear the movie in their preferred language using their smartphones, irrespective of the language in which it is playing in the theatre. The film will be available in all the dubbed languages in one theatre while the film is playing in one language in the theatre.

The facility will only be available inside the auditorium and will cease to play once outside, so there is no threat of piracy for the filmmakers.

The first film Cinedubs catered to was Rocketry: The Nambi Effect, and now the app will allow the viewers to watch Vikrant Rona in their preferred language out of the five languages, which is Hindi, Tamil, Malayalam, Telugu and the original language Kannada.

"I am blessed to have Madhavan as our brand ambassador. He understood the app well and then agreed to be our ambassador," said Additya Kashyap, who co-founded the app with his brother Vineet Kashyap.

Madhavan spoke about why he is endorsing Cinedubs, "The app will increase crowd in theatres as people will be able to watch one film in a theatre in 5-6 languages that the film is dubbed in. So if my friends prefer different languages, we can still watch the same film sitting together in one theatre in our respective preferred languages."

On asked if he would like to watch a Hindi film in his language, which one would it be, Madhavan said, "I would love to watch Sholay in Tamil and would want people to watch Nayakan in Hindi."

"Sometimes you don't get to enjoy the performances because you are busy reading subtitles. This app will change that," Madhavan added.

On asked if he would want to direct again, Madhavan jokingly said, "As a filmmaker, it takes a year and a half or more than that sometimes to earn back the money that you have put in, in the film. So I am thinking of just being an actor for some time."

This story is provided by PNN. ANI will not be responsible in any way for the content of this article. (ANI/PNN)