With over 1800 patents, Chandigarh University takes unparalleled lead in research and innovation 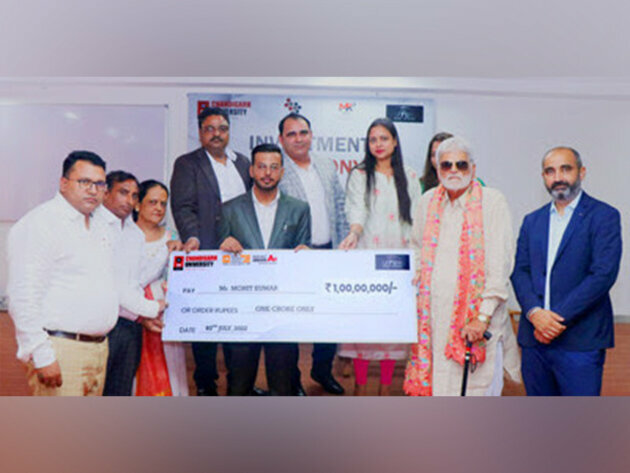 Chandigarh (Punjab) [India], July 25 (ANI/PRNewswire): True to its coveted acclaim as India's top research-Intensive higher educational institution, Chandigarh University has taken an unparalleled lead when it comes to research and innovation, positioning itself among India's elite and prestigious universities.

The top-ranked private university in the country to file the highest number of patents in past three year, the University has continued to focus on imbibing amongst its students the ability to resolve new, original problems, who along with the faculty are working tirelessly to achieve the Sustainable Development Goals set by the United Nations, thus marking Chandigarh University's contribution in making this world a better place to live in.

Ever since its inception ten years ago, Chandigarh University has laid focused and pointed emphasis on inculcating the spirit of research and innovation amongst its faculty and students alike. The consistent efforts made over the years in this visionary direction has helped the varsity establish itself as India's number-1 Research-Intensive University, acclaim in which the institution takes immense pride.

In a testimony to its research prowess, the students and faculty of Chandigarh University have filed 1816 patents so far. Of these, as many as 832 patents have been published, while over 200 patents are in the first examination stage. Apart from this, 120 patents of the university have been granted. The numbers are tall, anyway one sees it but what makes those special are the fact that almost all of these patents are relevant, and practical and contribute to the better being of the citizens of this world in one way or the other.

In line with the vision of the University, more than 900 of these patents directly cater to one or the other of the 17 Sustainable Development Goals set by the United Nations General Assembly, thus marking Chandigarh University's remarkable contribution in ensuring a secure and prosperous future for the current and upcoming generations of the mankind, even as the rest of the SDGs are also being fulfilled by other patents in one way or the other.

As many as 180 patents pertain to issues and solutions related to Responsible Consumption and Production, followed by 166 patents pertaining to Industry, Innovation and Infrastructure, while 161 patents relate to Sustained Cities and Communities. As many as 105 and 80 patents pertain to Affordable and Clean Energy, and Life Below Water, respectively, while other SDGs including Climate action (30), Decent work and economic growth(29), Good Health and Well-Being (70), Life on Land (80) and Quality Education (33) are also being fulfilled.

It is not for no reason that for the last three years, Chandigarh University holds the number one position among the private universities of the countries to file maximum number of patents, while it is ranked third in the number of patents published and granted. As per the latest Intellectual Property India annual report released by Office of Controller General of Patents, Designs and Trademarks, Government of India, Chandigarh University was declared the leading stand-alone institution to file highest number of patents, beating any of the academic institutions including Indian Institutions of Technology (IITs) or even Multinational Companies such as TCS, CSIR or BHEL by a significant margin.

Taking a lead in the research, Chandigarh University earlier this year established Kalpana Chawla Centre for Research in Space Science & Technology (KCCRSST), the first-of-its-kind in North India, with the objective of training students in space science and satellite development and to meet future challenges in the area of space research. This state-of-the-art space centre would be the Ground Control Station (GCS) for the Chandigarh University's Student Satellite (CUSAT), an in-house developed nano-satellite being designed by the students of Chandigarh University, and a Geo Spatial Centre for research, besides other important projects.

The CUSAT will be among the 75 student-built satellites to be launched into space on the eve of the 75th Independence Day in 2022 by Prime Minister Narendra Modi. With the CUSAT, Chandigarh University has become the first university in North India to design and develop its own satellite while after the launch of CUSAT, Punjab will become the first border state in India to have its own satellite in space. Not only will CUSAT collect data related to border intrusion detection, agriculture, weather forecasting, natural disaster forecasting and help in research and study of various problems in these areas, the GCS will help develop satellite research facilities and launch satellites in as many as 57 countries that do not have developed satellite technology, besides monitoring more than 380 satellites with over 810 transmitters in over 50 Countries.

The University Campus is home to IDC (Innovation and Entrepreneur Development Cell) and TBI (Technology Business Incubator), which have been set up by the Government of India. The TBI established in the university is one of the top 10 technology business incubators in the country, which provides training to students as well as provides financial assistance in addition to research, development and applications for patent registration. The University has 20 laboratories under industry collaboration, 30 state-of-art Research Centers, more than 60 research groups, where over 800 research scholars work on innovative research and innovation in various fields.

Another exhibition of the rich research prowess is seen in Punjab's first DGCA-approved drone training hub which was established at Chandigarh University in the month of April this year, along with a Centre for Excellence in Unmanned Aerial Vehicles. While the training hub will provide a multitude of DGCA-certified Drone and UAV training courses mandatory for acquiring the Drone Pilot Certificate, the Centre of Excellence will develop Hydrogen Powered Drones, Surveillance Drones, Anti-Drone Technology, besides conducting research in Applications of drones in Agriculture, Disaster Management, Satellite Testing, Surveying, Heavy Payload Drones etc.

Besides, Chandigarh University has been conducting extensive research in the areas of Agriculture, Climate Change, IT, Pharma, Biotech, Healthcare, Automation, Women Empowerment, Environment, etc. Chandigarh University has earmarked a special budget of Rs 12 crores for the promotion of Research & Innovation in the year 2022, so that the economic problems do not become a hindrance for the budding scientists of the future.

Not only research, but the spirit of entrepreneurship as imbibed into the students has resulted in a number of successful businesses coming from the varsity. As many as 143 start-up's have born in the laboratories of the varsity of which 14--almost 10% have annual turnover of Rs 10 lakhs while as many as 9 start-ups have turnover above Rs 20 lakhs.

While a lot of students passed out of Chandigarh University have been earning great, while doing their bit for the society, there are many students who are receiving liquid funding in the tune of Crores, while still being a student, for their start-ups.

This story is provided by PRNewswire. ANI will not be responsible in any way for the content of this article. (ANI/PRNewswire)