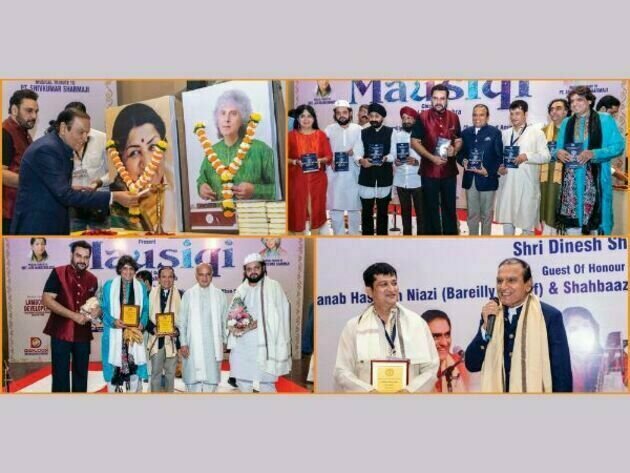 The Foundation has instituted a first-of-its-kind 'Dinesh Shahra Lifetime Award' for Excellence in Music. The initiative is supported by the Indian Arts & Cultural Society.

The Announcement of this novel recognition was made by Dinesh Shahra, Trustee -DSF, during a cultural event titled "Mausiqui' in Mumbai recently. Several stalwarts from the field of music, such as Padmashree Satish Vyas, Ustad Kamal Sabri, Shri Kuldeep Singh, Shri Jaswinder, Smt Anuradha Pal, Shahbaaz Khan and other dignitaries were present at the occasion.

India's music production relies heavily on thousands of instruments players, technicians, performers etc., who, through their creativity, produce some of the most popular tracks in the world. However, these professionals do not have a safety net to secure their old age and health once they are past their prime.

DSF, as a part of its mission to create a value-based social structure, has taken up the cause of supporting senior artists in cooperation with the Indian Arts & Cultural Society. Apart from a trophy or memento, the recognition will also include a significant cash component.

Pledging his support to the Indian musical fraternity, Dinesh Shahra said, "DSF is committed to promoting various aspects of Indian or Sanatan culture. Music is an integral part of our culture and is considered one of the ways to reach God. The Dinesh Shahra Lifetime Award, which we have announced today, will herald some unsung Indian musicians to the spotlight and acknowledge their contributions. It is our small way of encouraging more and more talented people to take up music as a career, thereby enriching Indian music."

The event 'Mausiqui' was a tribute to deceased legends - Pandit Shivkumar Sharma and Lata Mangeshkar who have made invaluable contributions to Indian music.

Apart from the soulful musical performances, one of the highlights of the event was the launch of Dinesh Shahra's book - Sanatan Leela, which is making waves across the country. Written in simple, lucid language, the book elaborates on certain keys to manifesting our true potential using Sanatan wisdom.

The Dinesh Shahra Foundation (DSF) was founded out of gratitude for all the knowledge capital Dinesh Shahra has gained over the last 50 years. It strives to create a value-based social structure based on the Indian or Sanatan ethos.

The Foundation is built with an intention to 'Give Back' to the entities responsible for society's material and spiritual development. Spirituality, sustainability, and education, along with women and child health, are the core causes of DSF.

This story is provided by PNN. ANI will not be responsible in any way for the content of this article. (ANI/PNN)

LOS ANGELES, California: Since early May, Charlie Hamilton has not irrigated his vineyards with water from the Sacramento River, despite ...

YANGON, Myanmar - Honeys Holdings, a Japanese clothing retailer that manufactures much of its product line in Myanmar, has decided ...

NEW YORK, New York - U.S. stocks rose sharply on Wednesday despite the latest reading that inflation in the United ...

WARSAW, Poland: Julie, who preferred not to give her full name, booked a group of trips to Warsaw last year, ...

SYDNEY, NSW, Australia - Stocks traded lower in Asia on Wednesday. Technology stocks were the hardest hit, and the exchange ...