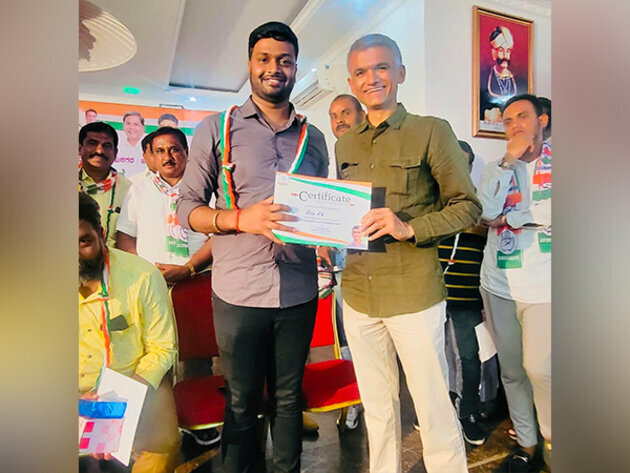 New Delhi [India], August 1 (ANI/ATK): In a world where politics and political duties are taken for granted, there are very few honourable individuals who stand out. One such compassionate and driven person is Dilip Kumar NS.

What started as a journey to right the wrongs and provide basic amenities to the people of his surrounding area, Dilip Kumar NS soon saw a catapult into very active politics, on his supporters' behest. A very rare sight in Indian politics, where people join hands to elevate and bring forward a young social worker. There was no looking back for him, henceforth.

Born to a humble family in Bengaluru, Dilip Kumar carved his own path of growth, creating a niche for himself. Armed with a master's degree in Interior Designing from the world-renowned Florence Design Academy in Italy, Dilip Kumar began his entrepreneurial journey as the Founder and Managing Director of Wallberry Studios. He simultaneously entered into the sectors of construction and mining and promptly earned a respectable name in all sectors. A sought-after individual who went the extra mile to ensure his clients are provided with the best of quality products and services.

But life had a different path for this young gentlemen. With growing popularity as an entrepreneur, Dilip Kumar wanted each and every member of society to be empowered, to be inspired and to have the right opportunities and facilities, that he believes every individual is entitled to. Thus began his life in service of the people.

Dilip Kumar sought the guidance of Krishna Byregowda, MLA of Byatrayanapura and seasoned and renowned politician from the Indian National Congress. Working under his arm and specialising in youth affairs, Dilip Kumar officially joined the Indian Youth Congress in Karnataka to expand his sphere of help and social service across the state.

With the backing and support of the people, Dilip Kumar NS contested for the post of President, Bangalore North, Karnataka Pradesh Youth Congress and emerged successful, leaving behind his competitors by a mile. With a new responsibility and a vision to better the life of the people of North Bangalore, Dilip began his journey as their representative.

Throughout the last ten years, Dilip Kumar has been the driving force behind the transformation of North Karnataka into a desirable place for citizens throughout the state. He has undertaken and delivered a wide range of beneficials causes, especially with the financially burdened sects of society. Under the guidance and mentorship of renowned politicians and MLA for Byatarayanapura, Krishna Byre Gowda, he helped him organise and led a multitude of social causes for the region. The most recent being the job fair at DEV-School which saw top multinational companies participate and hire the youth of Bengaluru North, giving them the opportunity to have a fulfilling career.

However, what truly cemented the trust of the people in Dilip Kumar was the vigour and dedication with which he worked relentlessly during the COVID-19 pandemic. Putting himself in fatal harms way, he was one the ground ensuring that the people he so values are taken care of.

This story is provided by ATK. ANI will not be responsible in any way for the content of this article. (ANI/ATK)