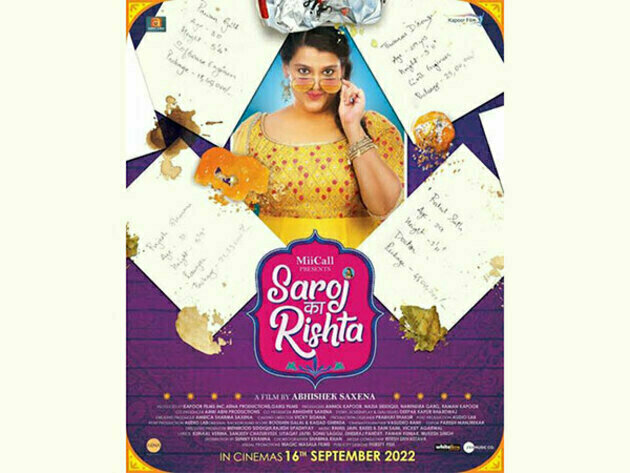 New Delhi [India], September 17 (ANI/PNN): The family entertainer film 'Saroj Ka Rishta' has finally arrived in cinemas. The film has garnered a huge response from the audience since it was released. The movie stars Sanah Kapur, Gaurav Pandey, Randeep Rai, and Kumud Mishra. It is directed by Abhishek Saxena and jointly produced by Anmol Kapoor and Aena Productions.

The story 'Saroj Ka Rishta 'is very unique and delivers a great message to society. Saroj doesn't care about her being overweight and loves to live the way she wants to. The film shows how without giving a damn about her weight she freely roams the street of Ghaziabad where there is no dearth of boys who lust after her and some of them are also eager to marry her also the father-daughter relationship is the highlight of the film. Interestingly, he loves her daughter Saroj to an extent where he tells her daughter to find herself a groom who would readily agree to stay in their home, instead of Saroj leaving her home after marriage!

The film was released on 270 screens. The strategy was not to overburden the cinemas as it is a content film and wanted to be very specific pockets where the audience is interested. Makers of 'Saroj Ka Rishta' have focused on small centers where the average ticket rate is Rs 100 to 150 and are happy with the positive reviews pouring across the country. It's time to make our way to the cinema to experience the incredible journey of Saroj.

This story has been provided by PNN. ANI will not be responsible in any way for the content in this article. (ANI/PNN)