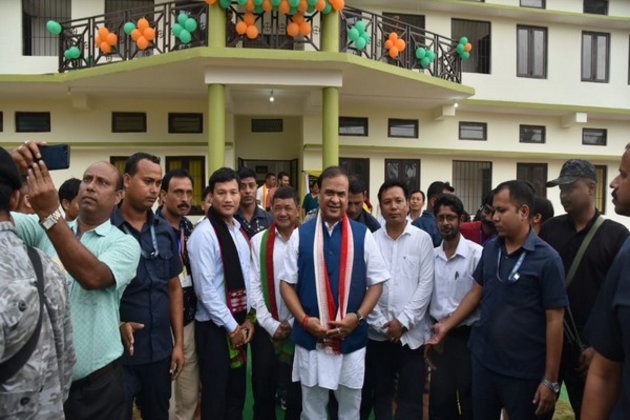 This apart, he also inaugurated the newly-constructed building of the Shrimati Jamuna Devi Saraswati Vidya Mandir at Langcherui and that of a temple dedicated to Lord Ganesha at Govinda Nagar areas of Umrangso.

Addressing a public rally, the Chief Minister referred to the current state of general peace in the once-restive region and expressed satisfaction at different ethnic groups co-existing with one another in a brotherly environment.

He attributed this to the coming to the mainstream of the Dimasa National Liberation Army in 2021.

Referring to the ongoing construction of the 120-Mw Lower Kapili Hydel Power Project whose foundation stone was laid by Finance Minister Nirmala Sitharaman and the Bamboo Industrial Park at Manderdisa, the Chief Minister assured the residents of the district of the current dispensation's seriousness in transforming Dima Hasao into one of the most developed regions in the State.

"The construction work for the 90-km long road connecting Haflong Tiniali with Lower Haflong will begin at the earliest while the development of the road connecting Lanka with Umrangso is expected to be completed within a year," he said.

Referring to the immense tourism potential of Umrangso, Sarma assured the residents of all steps necessary to develop the road and other infrastructure of the area.

"Improvement in the infrastructure scenario in the area will be a huge boost to its tourism potential," the Chief Minister added.

Sarma also declared the government's resolve to hold a Cabinet meeting in the hill district within the next seven months.

He appealed to all to raise awareness among the youths of Dima Hasao regarding the benefits available under the ST(Hills) category.

The Chief Minister also stressed upon the need for youths from the hill district to learn the Assamese language in schools, so that they don't face difficulties communicating while venturing out of the district to parts of the state in carrying out their job obligations in future. (ANI)