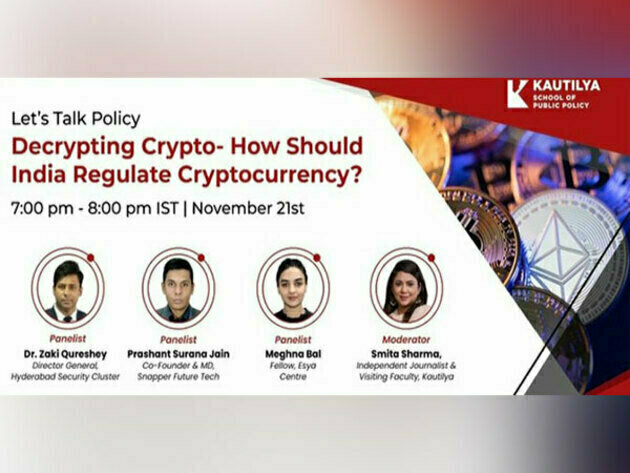 Hyderabad (Telangana) [India], November 19 (ANI/BusinessWire India): With the recent developments happening around Cryptos globally it's a very crucial time for India to have a policy framework for regulating cryptos with G20's Presidency the time couldn't have been better. Recently, our FM spoke about coming together with the G20 countries around crypto and regulating it together which seems to be quite a decent development in India's stance on crypto currencies. However, there's been a lot of things which happen with The draft Cryptocurrency and Regulation of Official Digital Currency Bill, 2021.

We are yet to decide on our fate on whether we join the league of countries like China, Thailand, Indonesia and Taiwan who have banned its use as against countries like Canada, Japan and USA who have proper laws regulating its usage & penalties for misuse. While the RBI and other global regulators like IMF have acknowledged the benefits of DLT (Distributed Ledger Technology) underlying cryptocurrencies, India can learn something from its Asian counterpart, Japan, which has some of the best crypto laws in the world. Recently published White House paper clearly demonstrated and outlined "How United States can strengthen its financial domination by using Digital Currencies and Assets to its advantage." Currently, the US has become again the dominant force with clear laws and regulations which helped them becoming #1 again in the digital Web3 world.

Institutions in India have shifted grounds on crypto many times with the RBI banning lenders from dealing with crypto exchanges way back in 2018, a move that was quashed by the Supreme Court in 2020 on the grounds of an Unethical violation of Fundamental basic rights.

While the global divide hardens on the issue- on the one hand, we have countries where crypto assets are becoming a part of the mainstream financial system and on the other hand, we see higher walls being constructed to save the citizen from its volatility. Currently, India is home to the largest crypto community in the world with over 50M+ users and billions of dollars of assets held by Indian investors. Unclear laws have resulted in a massive migration of India's talent and opportunity to nations like UAE, US and EU. India can increase its financial dominance by using digital assets and regulating it. India has committed several such mistakes in the past and lost technology dominance to other nations. With Web3 a new revolution on its way India with its unclear stance might lose its dominance over it as well.

"Today, entire traditional and commodities market is driven by speculations and unethical practices there have been and will be several fiascos but it doesn't mean we won't be progressive. India's been progressive and that progressiveness should also reflect in new asset class such as Cryptos. With this we see markets and investor protection laws getting matured over time, it's a journey and process," said Prashant Surana Jain, co-founder Snapper future tech & Cryptoforce.in

Our panel of esteemed speakers includes Smita Sharma a renowned independent media journalist, Dr. Zaki Qureshey founder and Director General of Hyderabad Cyber Security cluster, Meghna Bal fellow Esya Centre and Prashant Surana Jain Co-founder Snapper Future tech and Cryptoforce. The esteemed panel will discuss the virtues of the suggested ban and whether it will be effective technologically and fruitful in the long run.

Link for the webinar: https://kautilya.org.in/decrypting-crypto-how-should-india-regulate-cryptocurrency/?utm_source=linkedin

LONDON, England: While a new conflict with airports erupted this week over rising air fares and ground charges, still, international ...

NEW YORK, New York - U.S. stocks made tepid rises on Friday before succumbing to a wave of selling late ...

After decades of development, humanoid robots ready to be rolled out

MONTREAL, Canada: Data released this week showed that Canada's exports rose in October, mainly driven by pharmaceutical products and the ...

LONDON, England: As the governments of major economies are funding the development of green fuels to decarbonize, BP chief executive ...

NEW YORK, New York - U.S. stocks were bought up on Thursday, with all the major indices finishing with appreciable ...

WASHINGTON D.C.: The White House said the administration of President Joe Biden is considering a proposal from Republican leader Kevin ...

WASHINGTON D.C.: In a case that Supreme Court liberal justices said could empower certain businesses to discriminate based on constitutional ...

MOSCOW, Russia: Russian officials have said that some 2,500 Caspian seals have been found dead on the Caspian Sea coast ...

Indonesia to outlaw sex outside marriage

JAKARTA, Indonesia: In a legal overhaul that critics say could curb freedoms and police morality in the world's third-largest democracy, ...

Hawaii braces for eruption on Big Island of Honolulu

HONOLULU, Hawaii: Officials are concerned that a major eruption of the Mauna Loa volcano on the Big Island of Hawaii ...