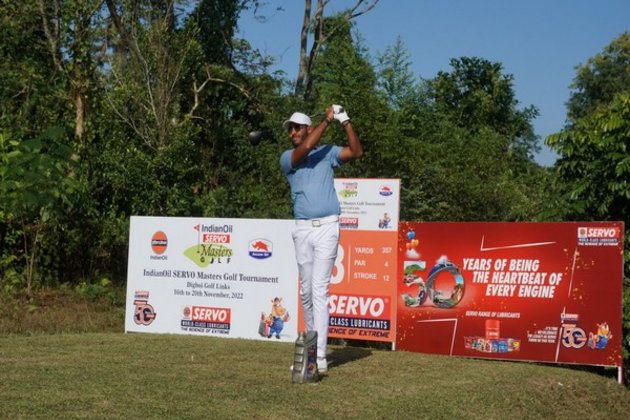 Digboi (Assam)[India], November 20 (ANI): Chandigarh's Yuvraj Singh Sandhu came from behind with a sensational eight-under 64, the day's best card, to retain his title with a two-shot triumph at the Masters 2022 played here at the Digboi Golf Links.

Yuvraj, who had also won his maiden PGTI title in Digboi last year, totalled 17-under 271 for the week, thus matching Ashok Kumar's record of five wins in a PGTI season set by the latter in the tour's inaugural season in 2006-07.

The 25-year-old Sandhu (63-70-74-64) now has eight professional titles, including six on the PGTI's main tour. Yuvraj's winning cheque worth INR 11,25,000 took his earnings for the season to INR 62,39,768 thus extending his lead in the PGTI Order of Merit to over INR 11 lakh over second-placed Manu Gandas who has four titles to his credit this season.

Arjun Sharma (66-68-70-69) of Greater Noida, the overnight leader by one shot, secured his second runner-up finish of the season after he shot a final round of 69 to total 15-under 273 for the week. Arjun, as a result, climbed from 28th to 19th place in PGTI's money list.

Yuvraj Singh Sandhu, who was the leader for the first two rounds before slipping to tied fourth and three shots off the lead after round three, came out firing on all cylinders with a flawless 64 on Saturday that featured four birdies each on the front nine and back-nine.

Yuvraj's ball-striking, the best aspect of his game through the week, stood out for him once again in round four as he found the edges of a couple of par-4 greens with his tee shots and a couple of par-5 greens with his approach shots to set up chip-putt birdies there. Sandhu also sank a 15-footer on the 13th and was two-on on the par-5 15th making birdies on both occasions.

Yuvraj said, "I generally don't start an event well but with my round of 63 here I told myself, if I can do it on day one, I can certainly do it on day four. The thought that inspired me at the start of the round today was that I began my golf in Assam so I have a special connection with this place and therefore I have to do well here. I thank my family and my entire team consisting of my coach, trainer and physio who have always believed in me. My father sent me a long text in the morning today which also encouraged me and egged me on to play well. Ball striking was the best part of my game this week.""The objective at the start of the tournament was to find maximum greens as the greens are generally small here. I managed to execute that plan well. I started cold today but after the front-nine saw an opportunity for myself. Last year I played the hottest back-nine of my career on the final day here. I was running that performance through my mind on repeat when I was playing the back-nine. That helped my cause. I'm pleased to be leading the PGTI Order of Merit at this stage and look forward to maintaining my position with just three events to go in the season now."Arjun Sharma mixed five birdies with two bogeys on day four to bag second place. Yashas Chandra sank an eagle on the seventh and four other birdies during his error-free round that lifted him nine spots from his overnight tied 12th.

N Thangaraja made seven birdies and two bogeys during his final round of 67. Gurugram's Manu Gandas ended tied 29th at three-under 285. He continues to be placed second in the PGTI rankings. Dulal Kalowar, the only local professional to make the cut, closed the week in 58th place at 10-over 298. (ANI)