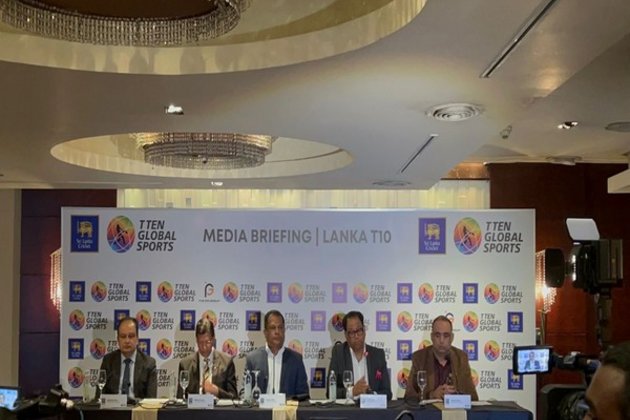 Colombo [Sri Lanka], November 20 (ANI): Cricket's fastest format, the T10, is spreading its wings far and wide, as it makes a touchdown in Sri Lanka. The tournament will be called the Lanka T10 League and is expected to attract plenty of fans with its dynamic brand of cricket.

"The introduction of the fastest cricketing competition in Sri Lanka is definitely a great addition to our cricketing calendar, and we are happy to be a part of the forward journey of the game, which continues to evolve to be on par with the changing dynamics in the global sporting arena, and I wish to commend TTen Global Sports for its role in this latest initiative," said Shammi Silva, Honorary President, Sri Lanka Cricket.

"We are extremely happy to announce the launch of the Lanka T10 League, which is the shortest format of the game, and I am confident that this competition will provide entertainment and excitement to the fans, quality competition for the players, and valuable exposure for the stakeholders," said Mohan de Silva, Honorary Secretary of Sri Lanka Cricket.

Much like the various leagues across the world, the Lanka T10 is expected to attract some of the most impressive international cricketers and shine the spotlight on bright young talents from the Emerald Island.

"We are delighted to launch the world's fastest format of cricket, the Lanka T10 League in Sri Lanka, which is a landmark move being the first full member board to launch this format. SLC has always supported TTen since its inception in 2017 and we look forward to building further on this partnership," Shaji Ul Mulk, Chairman of TTen Global Sports, said.

T10 has become an important part of the cricket calendar with the advent of the Abu Dhabi T10, which is all set to embark on its sixth season, with a total of eight teams, of which two are new franchises from the USA. (ANI)

WASHINGTON D.C.: The National Retail Federation (NRF) has reported that even as inflation has negatively affected many household budgets, heavy ...

IRVING, Texas: Exxon Mobil Corp will wind down oil production in Equatorial Guinea in West Africa after its license expires ...

HOUSTON, Texas: QatarEnergy and ConocoPhillips have signed two sales and purchase export agreements covering at least a 15-year period, which ...

ISLAMABAD, Pakistan - Russia refused to give Pakistan a 30-40 percent discount on Russian crude oil, claiming that all volumes ...

NEW YORK, New York- U.S. stocks were uneasy early Wednesday following a release of a raft of economic data but ...