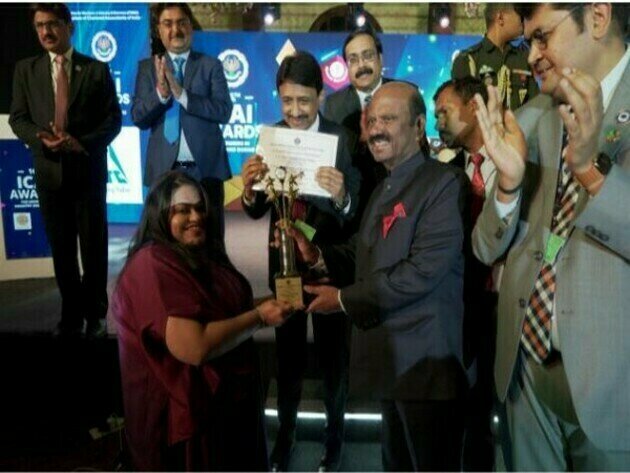 The ICAI Awards is a national ceremony hosted by The Institute of Chartered Accountants of India to honour and acknowledge the exemplary achievements of its members. The awards recognise individuals who have attained exceptional levels of professional achievements in industry and business and are committed towards their goals. CA Shilpa Mehta was awarded the 16th ICAI Awards under the Category, "CA Special Recognition (for specially-abled members)" for her exceptional level of professional achievement.

On account of receiving the recognition, and being given the ICAI Award 2022, Shilpa pledges to pay it forward by supporting 100 people with disabilities to pursue their CA in the next 10 years through her foundation, dJED Foundation. In this regard, she has earmarked Rs. 10 lacs and seeks to spread the message of hope and courage. With this endeavour, she aims to mentor and fund support to specially-abled members of society so that they can create an independent identity of being a CA, and support their own families.

Shilpa is a Chartered Accountant (CA) and She holds an MBA from the prestigious Jamnalal Bajaj Institute of Management Studies. Professionally, Shilpa has been associated with the likes of Polaris Software Labs, Hinduja Group, etc. commanding an experience of twelve years in the corporate sector in senior management roles. Thereafter she joined a family-managed business, where she diligently contributed to its five-fold growth to catapult it to the no. 1 position in the industry today.

Diagnosed with Scoliosis (Polio) when she was two months old, Shilpa grew up with 94% Post-polio Syndrome affecting her lower limbs. Despite the mammoth physical setback of living with polio, Shilpa set foot on an ambitious journey with grit, passion and determination. Her "Never Say Die" attitude has enabled her to pursue varied interests such as driving, swimming, cooking, trekking, camping, paragliding, and kayaking without any assistance. She, along with her husband also runs a club for children, Me2 Club, where she provides experiential learning, and delivers inspirational talks to motivate, empower, and instil courage in young kids.

While growing up Shilpa was a bright student, learning in a conventional education system. But being unable to participate in all school activities, and being looked at with pity by her relatives, cemented in her the feeling of being different. She was raised around doctors, treatments and medicines, and even religious saints for her condition. She was hopeful, and was of the belief that she would be cured, up until she learnt about her condition when she was in the 8th grade of schooling, which was a hard pill to swallow.

However, soon after she understood the condition, she worked brick by brick to build a life of dignity and respect. While initially, she planned on becoming a doctor, circumstances directed Shilpa on the path of Chartered Accountancy. Her life underwent a complete overhaul, and for the first time she found meaningful relationships, which did not treat her as a person with a disability, but as one of immense inner strength. She duly credits her success to those friends who did not expect her to match their pace but tried to walk with her at her pace (one of whom is her husband Dilip Jain).

Shilpa started dJED Foundation in partnership with her husband Dilip. Incepted in the year 20202, the foundation works on 3E's - Education, Entrepreneurship, and Environment, by empowering indigenous & marginal communities & people. In the last few years, they have executed four major projects, expanded their work to three states, and have been instrumental in creating a positive impact on the lives of 5000+ people.

Expressing her thoughts, CA Shilpa Mehta says, "I am humbled to be honoured by the prestigious ICAI, an organisation which is very close to my heart. It has been my dream to establish a successful career, and be independent. Today, I feel overwhelmed to see this dream fructify, and wish to share the fruits of my hard work with individuals who are like me. I have been rather fortunate to have an ever-loving family and friends who have been a strong pillar of strength. I, therefore, wish to extend that support system to convert individuals who are called a liability into strong assets of the society."